We are partners in a regional K-8 school with the other Catholic Churches in our area (and we have the blessing of the school being next door to our parish).

The parish is 16 miles from Gulf Shores, Alabama… so let me know when you will be in the neighborhood on your way to the beach!!

Please use this email to contact me in the future:  father.jdd@gmail.com
And delete ALL others.

Thanks and God bless,
FrJDD

It's been about a month and a half... lots going on during the Summer... but catch-up first.

The school ended with a flurry of activities - talks, meetings, banquets, dinners and awards - usual activities.  We had a couple of great speakers on campus: Tom Hoenig (grad of BC and serving on the Federal Reserve Board) and George Weigel (BC Commencement speaker).

For the third time I played on the monastic team in the Bob Goalby golf tournament/fundraiser for our high school (Maur Hill-Mount Academy).  And for the 3rd time, we came in dead last (and no one was close to us)!

Senior Week activities took me to a Royals-Red Sox game... a rare home win for KC (4-3)!

The BC Baccalaureate Mass was on Friday, May 11 (Archbishop Naumann preached a great homily, as usual) and Graduation was the following day.  On Saturday night I attended a celebration of 3 locals who recently earned their doctorates - Linda Henry, Joe Wurtz and Andy Swafford.  All great folks on staff at BC!

The next day (Sunday, May 13), I left for a short home visit.  The following Saturday (May 19), I attended the priestly ordination of Fr. Brian Lager (a former FOCUS missionary whom I got to know while he was stationed in Alabama some years ago).

On May 20th I left for the U. of Illinois (Champaign, IL) to assist for 2 weeks at the FOCUS Summer Training.  It was a blast, as usual.  I met our new team of 12 great missionaries coming to BC in August.

I arrived back in Atchison last Sunday evening and we started our annual monastic retreat last night (Monday, June 4th).  We have the BC Alumni weekend coming up this Fri-Sun and on Monday I leave for 2 weeks of a Junior Institute for monks in Schuyler, Nebraska!

All is well... please keep us in your prayers as we prepare to elect our new Abbot in December.  The best way to keep in touch with me is through e-mail (father.jdd@gmail.com).

This is what happens when you give something nice to irresponsible children:
http://espn.go.com/college-football/story/_/id/7821303/alabama-crimson-tide-crystal-bcs-trophy-shattered-mishap
I know one way this can be prevented from ever happening again... AU beating these bums every year in late November!!
Posted by Anonymous at 10:58 AM 1 comment:

A nice video from our El Salvador mission trip: http://www.youtube.com/watch?v=aNWuq9Azk70
Posted by Anonymous at 8:46 AM No comments:

Sorry... long time, no update. And a lot has happened!
Things continue to cruise at Benedictine College (BC) and with College Ministry. I went on a 9-day mission trip to El Salvador with 26 college students ("Alternative Spring Break"). It was a great trip - we built 3 houses, met many of the local poor people and saw a style of life that most of us are not familiar with in the USA (it was sobering in a good way!). The students kept people up-to-date by means of a blog. If interested, check it out (read from the bottom up): http://elsalvadormissiontrip2012.blogspot.com/
Also, the new Academic Building opened at BC - it is fantastic. And one of the first extracurricular events held there was a Symposium for the Advancement of the New Evangelization. It was well attended with great talks (and food). It was the kickoff event for the new Institute for Missionary Activity established at BC! You can check it out here: www.benedictine.edu/ima
I attended the anti-HHS mandate rally in KC on Friday, March 23rd. We have to fight hard against this Presidential administration's evil work!! Hopefully the Supreme Court will help us during the summer... Prayers needed!!
The BC students initiated a Benedict's Bowling Bonanza bowl-a-thon to help us with our Capital Campaign. Our IT person did a good job designing a website for the event (www.Bowl.KansasMonks.org). It took place on Saturday, March 31st. I bowled a 253 (praise and credit to God - seriously!) to rake in over $15,000. It looks like we raised about $30,000 total (we will know more precisely after all of the bills and pledges get paid). It was very successful and we are already looking toward next year.
Those are the main things that have happened over the past 2 months...
May you all have a very Blessed Easter,
Father Justin Damien Dean, OSB
Posted by Anonymous at 4:11 PM No comments:

I hope that this note finds you well. I am doing great here in Kansas as we are in the midst of an unusually mild winter (by Midwestern standards)! But after the last 2 cold and snowy winters, I am not complaining.

Our monastery (St. Benedict’s Abbey) is in the midst of a ($3.2 M) Capital Campaign (www.ShareOurMission.org) to repair the roof and replace the windows in our 83-year-old home. Our students (at Benedictine College) have decided to assist us by hosting a bowl-a-thon (Benedict’s Bowling Bonanza) on March 31st (bowl.kansasmonks.org). I am going to bowl and I would like for you to consider sponsoring me! Donors can give a one-time gift or sponsor a bowler (like me!) a certain amount of money per pin. We will bowl two games and will count the highest single game score in the calculation of the pledge totals (my goal is to bowl a 200 game, but I am hoping for even higher).

To make a pledge (or a donation), go to bowl.kansasmonks.org and click on the “Sponsor a Bowler” tab at the top of the page and follow the instructions. Or if you prefer, you can just respond to this e-mail with your pledge and I will do the rest! All gifts to this good cause are tax deductible. And please send this request to anyone whom you think would be interested in helping our monastery!

Thanks for your consideration (and generosity).

Posted by Anonymous at 2:35 PM No comments:

"The Amish do not carry health insurance. The government respects their principles. Christian Scientists want to heal by prayer alone, and the new health-care reform law respects that. Quakers and others object to killing even in wartime, and the government respects that principle for conscientious objectors. By its decision, the Obama administration has failed to show the same respect for the consciences of Catholics and others who object to treating pregnancy as a disease."
- Archbishop Dolan of NYC in response to the contraception mandate
Sign a petition to stop this travesty of justice and usurpation of Religious Freedom!!
http://stopthebirthcontrolmandate.org/
Posted by Anonymous at 8:53 AM No comments:

Cardinal Ratzinger (now Pope Benedict) and myself, May 1989 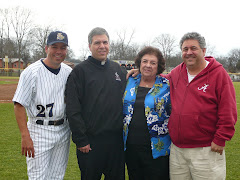 Some great charities worth supporting: